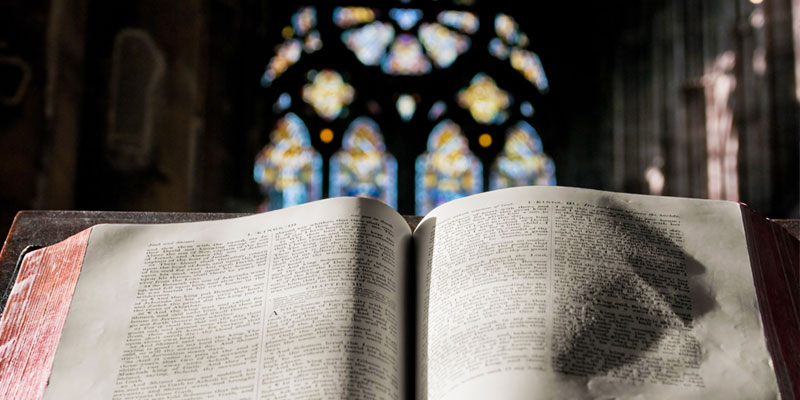 This interview was recorded live from the exhibit floor of the 2018 Southern Baptist Convention Annual Meeting on June 2018, in Dallas, Texas. Robert Smith is a Preaching Professor and holds the Charles T. Carter Baptist Chair of Divinity at Beeson Divinity School at Samford University in Birmingham, Alabama.

Michael Duduit:        Welcome to the Preaching Magazine mini-interview. I am delighted right now to be visiting with a great old friend, Dr. Robert Smith, who is Professor of Preaching at Beeson Divinity School and we’ve been friends together for maybe 80 years or so.

Michael Duduit:         So one of the areas I know that has a great interest for you is the Trinitarian element of preaching. Talk to me a little bit about why that’s important and kind of some of your thoughts in that area.

So for me it’s the emphasis John provides for us when it comes to the Trinity and presence, he says, and I like his definition, that God is a sweet and holy society and eternal fellowship, a mutuality of reciprocity.

God has forever known himself as Father, Son, Holy Spirit, which for him and for me means that God cannot be trichotomized. That God is not three Gods, God in three persons. Mysterious, indivisible, and yet interpenetrating himself and all that he does, so I want preaching to be intentional about including the person of the Holy Spirit. The Holy Spirit for me in preaching is the neglected God.

Francis Chan calls him the forgotten God. He’s the neglected God. We believe that he’s there, but unfortunately, he becomes the stepchild of the Trinity.

Michael Duduit:         And for a pastor, preacher, what is the role of the Holy Spirit in the whole process of preparing and then presenting the sermon?

Robert Smith:              I like the fact that the Holy Spirit is totally involved in our preparation and as John Calvin would say, that he is the eternal witness of the spirit, that as I prepare the sermon and preach the sermon, it is the Holy Spirit who is enabling interpretation and understanding of that scripture that I’m preaching on the part of the hero because I don’t know the heart of the hero, and then after the sermon is over, he’s the after-preacher in terms of convicting that individual who’s heard the sermon.

So when people come to me, and it’s always an opportunity for me to realize, Robert, all you did was to make yourself available for the Spirit to use. And people will ask with tears in their eyes, “How did you know?”

I didn’t know! And I’m always amazed at how the Spirit has taken something in my preparation, in my presentation, which I thought was insignificant. In fact, it was kind of a pneumatological Holy Spirit editing moment. I didn’t plan on saying that at all. And it came kind of off the cuff, like, God really loves you. Which I assume everyone knows.

Doesn’t seem to be profound, but that’s what they got. They didn’t get my fine three points and my great illustration. They got something as simple as God really loves you unconditionally. And with tears in their eyes, they have gained a greater appreciation of grace, greater than anything that I could have said intentionally when it comes to profundity. Amazes me.

Michael Duduit:         Wow. One of the things that we’re mandated to do is to preach the whole counsel of God. How do we do … How are we doing at that, in terms of preaching that the riches of the Old Testament as well as the New Testament?

My sense is that for many pastors, the canon of scripture basically begins and ends with Paul with an occasional Gospel. How are we doing in terms of preaching that whole counsel of God?

So the Bible is a Him Book. It’s an H-I-M B-O-O-K book. It’s about him. And when Jesus says in Luke 24:27, after talking to these two disciples on the road from Jerusalem to Emmaus, he expounded upon the scriptures and showed how everything from Moses, the prophets and the verse 44, the writings, all the Psalms, all three portions of the Old Testament were written concerning himself.

So that says to me that the Bible is about Christ, the man of salvation. Now how do I take and show the presence of Christ, or if you will, the theocratic offices of Christ as prophet, priest, and king in the Old Testament? And show how that comes into play in the New Testament?

So if I lift up and it’s very easy to do this one, but John 3:14, “As Moses lifted up the serpent in the wilderness, so shall the son of man be lifted up.” Well, that’s in the book of Numbers. Numbers 21.

And of course when the children of Israel, through their complaining, were bitten by snakes. And the Lord said to Moses, “Put this snake on a pole. And anyone who looks up and sees the snake shall be healed by the same reptile.” That Christ became what he was, not human in order that he might remain who has always been the vine, the word becomes flesh. He becomes one of us. And therefore we look to the second Adam, the first Adam yielded to see him. The second Adam became sin, without sinning that we who are sinners might be made the righteousness of God.

So I’m going to always look and see where is Jesus in this text topologically, illustratively and anecdotally.

Where is Christ? And then how is the spirit moving to bring conviction on the part of the hearer of the scripture? And the scripture is inscripturated by the Holy Spirit.

And what does he do? John 16:13, he leads and guides us into all truth. He reveals. John 16:14, He has come to glorify Christ. And so I’m looking at all of this. His whole business is to be the public relations manager of Jesus, to showcase Jesus, advertise Jesus and the cross the father sends the son, and the son sends the spirit. And the three persons of the Trinity are totally involved in revealing in the New Testament what has been concealed in the Old.

Michael Duduit:         Yeah, that’s great. I always love hearing you preach. I always feel like I’m hearing a word from the Lord when I hear you preach. How long does it take you to prepare a typical sermon?

It’s harder for me to preach now after 52 years than it has ever been before. It’s always a mystery. I’m always entering into the preaching hall, Tabula Rasa, blank slate. I really don’t know. I mean, I’ve got a process. I’ve got a methodology, those kinds of things.

But I want to sit there and bask in the glow of the Spirit. And I’m not trying to sound religious. I’m just telling you. I like sitting there inductively, wondering where the Lord is going to lead me in terms of the development of this sermon, the compiling of the information. I’ll probably prepare 10 times as much as what I will need. It’s the overflow. I’ll use 1/10th of the 10% that I use in terms of the sermon

If it doesn’t speak to me, it’s not going to speak to Pastor Michael Duduit. So I’m preaching to me during this process and when it’s coming together and I begin to get a glimpse of how it’s going to look, I have to put it down and go into worship and shout a little bit because I’m feeding this thing. It’s working, it’s coming, but it’s not a preconceived approach. It’s an approach in which, you know, I know the homiletical methodologies and all of that, the forms, all of that, but Jello is good whether you put it in a rectangular container, a square, a circle. It’s the Jello I want.

I don’t particularly care about … So that’s why I say I believe expository preaching ultimately is not a form, it’s a principle. A principle in terms of exposing the text, whether it is a narrative text or whether it is propositional truth texts like Paul’s epistles or whether it’s writings or whether it’s parabolic. I’m interested in using, if you will, the form that they all think he is, because I believe, I don’t believe it was the text inspired, but the form was inspired. But ultimately I want to bring out the truth the text so that I have the Jello, whether I serve it in a different configuration. I want the Jello of the scripture.

Michael Duduit:         What do you enjoy most about preaching?

Robert Smith:              I enjoy seeing God move in the midst of people who seem to be, from their facial expression, disinclined toward listening to the message or uninterested, sometimes with folded arms and clenched teeth. Sometimes leaning back with crossed legs and I like to see them scoot up.

I like to see God moving. I had a man say to me one time, I was the first African-American to preach in that church and it was a revival. It was in Arkansas. A man came to me and he had tears in his eyes and said, “A few years ago, I never would have come to hear you because of my prejudice, and my racist philosophy.” But he said, “As I listened to you, the Word gripped me.”

And he was this strong, muscular man, crying like a baby because of what scripture had done to break up that kind of complex. He came every single night. I didn’t do it. My blackness had absolutely nothing to do with it. But the word of God is able to change people.

Word of God is handled … That’s what I enjoy. I enjoy the transformation, But I know I’m not doing it.

Michael Duduit:        Isn’t it amazing what the power of God does through his word to take a life like that, that has bitterness, hatred, and can just … the grace of God just bring transformation?

Michael Duduit:         Robert, thank you so much for visiting with me today.