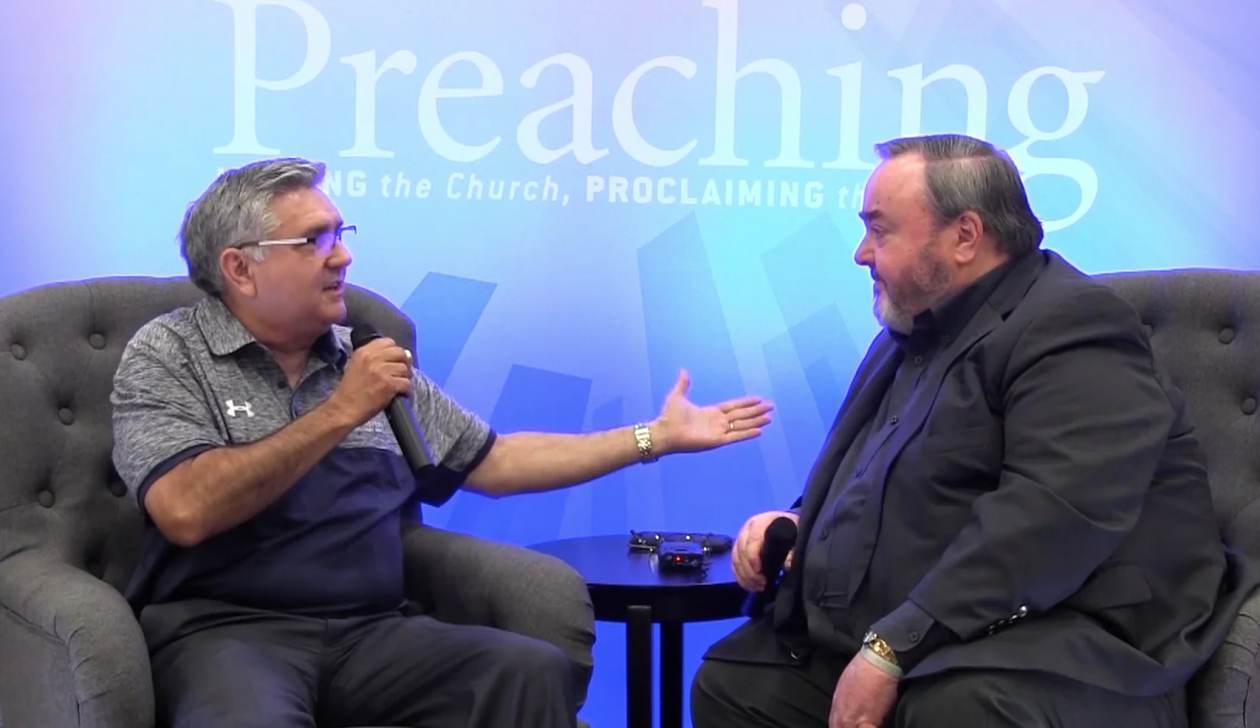 This interview was recorded live from the exhibit floor of the 2018 Southern Baptist Convention Annual Meeting on June. David Allen is the Dean of Preaching and holds the George W. Truett Chair of Pastoral Ministry at Southwestern Baptist Theological Seminary in Fort Worth, Texas.

Michael Duduit:         Welcome to a Preaching Magazine mini-video interview. Talking today with Dr. David Allen, who is the Dean of the College of Preaching at Southwestern Baptist Seminary. David, thanks so much for taking the time to visit with us.

In other words, it’s not audience driven. The audience is important, you must exegete the audience. You must be a good communicator. Communication theory is important, but when it comes to preaching, we’re not just preaching sermons, we’re preaching texts, which, my friend Dr. Steven Smith is fond of saying.

And so, the text is king. And what we mean by text-driven preaching, really, is preaching that attempts to stay three to three things: the substance of the text, the structure of the text, and the spirit of the text. And then the sermon is woven around those three things where, whatever that text is about, and what it is saying about what it is about, the sermon is built on that text. It stays with that text. We don’t deviate from that text. We don’t do a lot of proof-texting in our teaching, where we bring in 10 or 12 other verses. A lot of preachers do that. We don’t advocate that.

Rather, take that text, stay with that text, stay with the substance of the text. Number two, allow the structure of the text, not just the overt syntactical structure, though that’s crucial, but the actual, what we call the meaning structure. The word for that is semantics. What is the semantic structure of that text? What is the mainline information versus the subordinate information, and the communication roles the author is trying to communicate?

Good expository preaching figures that out structurally from the text and then attempt to reproduce that such that the meaning of the text is clearly and accurately reproduced in the sermon. So, text-driven preaching attempt to stay true, secondly, to the structure of the text.

Number three, the spirit of the text. And that’s just a term that we use to define or to describe the genre of the text, the literary category of that it is, and the tone or spirit of that text. Is it a halal Psalm? Is it imprecatory Psalm? Is it a narrative? Is it a letter? And these are the kinds of things you don’t preach. For example, Genesis 22 is a narrative, Psalm 1, poetic genre, Romans 8, expository genre, in terms of discourse. You don’t preach any one of those three texts the same way because the genre is different.

So good preaching reflects the genre. We don’t do cookie-cutter preaching. You know, three points for everything, and treat a narrative the same way we treat a poetic text, the same way we would treat a text of expository literature, a text like a letter in the New Testament.

David Allen:                 So, we’re attempting to blend those three, create sermons, write sermons, that stay true to the substance, structure, and spirit of the text. That’s the essence, really, of what we mean by text-driven preaching. And it’s really just expository preaching, but with a little refinement there, and arguing that the sermon should really reflect however many points, or if you wanna call them moves, or whatever you wanna call them, but whatever’s going on in the text, that needs to be reflected in the sermon.

You don’t wanna preach a three-point sermon on a text that only is making one major point or two major points. You wanna reflect that structure, semantically, that’s in the text, in the sermon. That’s what we’re talking about.

Michael Duduit:         Yeah, yeah. Now, as you develop a text-driven sermon, what would be typical in terms of the amount of time that you would spend on exegetical work and then crafting the sermon itself?

But many pastors, depending on their week, they may not have that time. They may not be able to do that and so they may have to cut a few corners here and shorten some of the steps that are in the process. But I would say that if a man can spend eight to 12 hours in the preparation of a text-driven sermon, I would consider that minimally necessary to really treat a text well.

Getting everything done from the very first moment of exegesis work, all the way to the finished product before you preach it on Sunday morning, eight to 12 would seem to be a good rule of thumb there.

Michael Duduit:        Do you advocate crafting a manuscript as you develop this sermon?

David Allen:                 I do, for those who desire to do that but not to use in the pulpit. There are some who craft manuscripts, I’ve done that on a few of my sermons, but most of my sermons, I get two to three pages of notes and then I craft the sermon in my mind from those notes and then preach it pretty much extemporaneously with little or no notes in the pulpit. That would be my advocacy. That’s what I would advocate for, but the writing of a sermon manuscript can be very important because writing…

You know Francis Bacon said, “Reading makes a broad man, writing makes an exact man.” And clarity has to be crafted. It is not accidental in preaching. We are not going to accidentally be clear. And one of the ways that we can improve the clarity of our sermons is writing them out. And so, I am a fan of that and an advocate of that, but I’m not a fan of taking a manuscript into the pulpit, or even a large number of notes, or even a few notes. I’m just an advocate of preaching without notes, but manuscripting your sermon before you preach, I think, is very fine and can be very, very helpful.

Michael Duduit:         As you develop text-driven sermons, what’s the place of application in that process?

David Allen:                Application is crucial. I think all good expository preaching, or text-driven preaching, virtually synonymous as I’m using those terms, should have application. I think good preaching has application. One has to work at that because some texts are easy to apply. They’ll have very clear imperatives, do’s or don’ts, or a practical application is woven into the text. Other texts don’t have that. A narrative, like Genesis 22, the Abraham/Issac narrative, we don’t have direct application given in the text so you have to determine how do I apply that to my people? What is that text about anyway? And how does it apply?

Michael Duduit:         David, thanks so much for taking time to visit today.