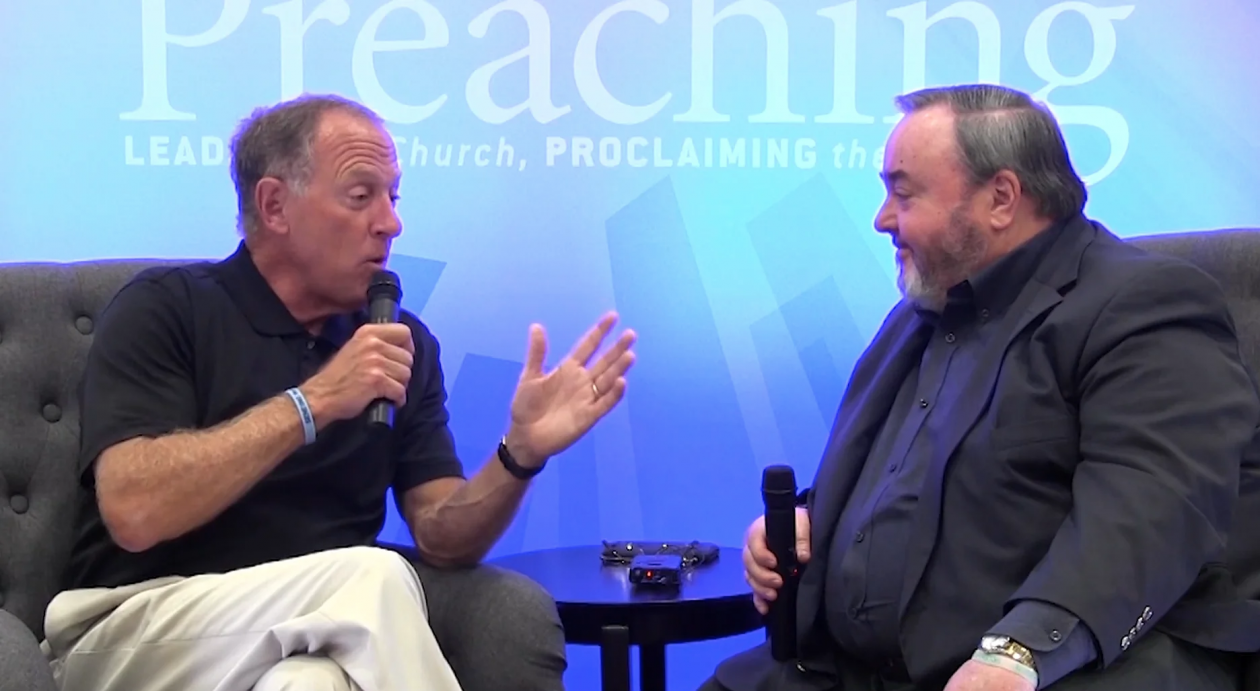 Michael Duduit:        Welcome to a Preaching Magazine video mini interview. I’m visiting right now with Dr. Bryant Wright, who is the pastor of Johnson Ferry Baptist Church in Marietta, Georgia. Bryant, thanks so much for visiting today.

Michael Duduit:         Well, now you have been pastoring how many years now at Johnson Ferry?

Bryant Wright:           Well, I went there 36 1/2 years ago to be the founding pastor, and we were meeting in a doctor’s office for about the first year. I would set up the chairs in the foyer of an unleased doctor’s office for Sunday morning worship service during those days.

Michael Duduit:         Well, that prompts an interesting question. How has your preaching changed during that time?

Bryant Wright:            Well, hopefully, it is richer with all the years of study, hopefully. I know you’ve had to ask the folks that have been there a while if that’s the case, but I think obviously as you study the word in a very disciplined way week after week through the years you’re going to have so much more content and material to share.

I will say this. I think for any young pastor, you can get in a weekly cycle of preparation for your sermon that can continue on for the rest of your life. I’m able to study more now in the sense of study getaways that I now have once a quarter for long-term planning. I didn’t have that opportunity as a young pastor, but I just established early on I was going to give all of Thursday for sermon prep, half a day on Friday, and half a day on Saturday, and that basically process on a weekly scale has continued. I realize when you’re the only staff person and you don’t have a whole lot to offer as far as ministry programs, no children’s ministry, student ministry, that kind of things, the one thing that we could offer them on Sunday morning in an empty doctor’s office was hopefully a meaningful message from the Word of God. I just poured myself into being prepared week after week and prayed that God would use that.

Michael Duduit:         That’s good. That’s good. How long do you typically spend now in actually developing a sermon for Sunday?

Bryant Wright:           People ask me that a lot, and I would say it’s anywhere from 10 to 20 hours a week if you consider that I get away once a quarter for about three to five days and all I’m doing in that time away is sermon outlines for the next three to six months. I’m not thinking about those hours being in the total, but they’re certainly a part of the total when you think about all that’s involved in that weekly sermon.

It’s all day … Thursday’s my longest day because I really love that sermon preparation time. I like to have a rough draft manuscript by Thursday night. Then on Friday, I am really re-outlining and fine-tuning. The final outline I do on Saturday night before I go to bed is really the smallest outline of all. I just try to get it more and more succinct. I have a card in the back of my Bible. I don’t pull it out while I’m preaching, but I often glance at it before I step up there just with the key thoughts there.

Michael Duduit:         Yeah. When you’re in the preparation process, do you craft a manuscript in your study?

Bryant Wright:            I do, and it’s a very rough draft. When I get away on the quarterly study times, I don’t take any commentaries, because I really believe during that time is to let the Holy Spirit take me through the text and get an outline. As I’m doing that basic study just going through the text, I’m writing out all kinds of questions for the commentary, questions for the commentary that I know I’m going to have to address in that weekly study time. I just try to have it be a time of prayer and letting the Holy Spirit speak, giving me the key themes that I think God is saying, and then when I come to that week …

For one thing, when you know three months to six months ahead what you’re going to study that week, is I’m filing articles, which I constantly do, three to ten articles a day probably just because it’s a part of my life. I’m thinking of an article that I read in the New York Times or I read in the Atlanta Journal-Constitution that that might fit a sermon. I know it’s three months away, but I just go ahead and just give it to my assistant to file away. It really helps you then to have more illustrations when you come to that week because you know where you’re headed ahead of time.

Michael Duduit:         Yeah. Now, that idea of these quarterly planning sessions is a great idea. I know some guys get away for a couple weeks in the summer and plan the year. You’re kind of breaking that up into sections. When you get away for, what, a day or two maybe?

Michael Duduit:         What does that process look like for you during one of those planning sessions?

Bryant Wright:            Well, there are two things that are done then. One, sometimes I’m focused on planning a series or several series and I work on the titles and the text. I don’t do outlines. I’m not studying the text. I’m just trying to get an idea. When you’re in a church like Johnson Ferry, you’ve got six services. You’ve got two venues, so you’ve got two completely different styles of worship. The worship and art teams, I can’t call them on Thursday and say, “Why don’t we do this idea?” I have to give them months ahead so that they can do their planning to have a thematic worship from the beginning to the end.

Sometimes it’s just working on titles and texts in a series by dates, but most of the time it’s I know what my series is going to be so I just get there and I just start working through each text and coming up with the clear themes, hopefully, one clear theme, but the clear points of that outline. By the way, Michael, that’s all joy. That getaway time now is all joy. I feel like I’m in a zone thereof just doing what God has created me to do. It’s really a joy.

Michael Duduit:         Yeah, that’s good. Do you tend to preach through books, or do you develop other kinds of series? What’s your approach?

Bryant Wright:            I have preached through some books, but I have found that to do adequate exposition of a book usually takes a long time. What I’ve done is sections of books. I do a lot of Old Testament biblical characters. I have this giant notebook. I’m a neanderthal pastor that I don’t use a computer. I realize that. I have a giant notebook that is every sermon, title, text, and series that I have preached. I’ve got a section for all of them in the Old Testament in my book, all of the New Testament, and then a chronological thing. When I’m on those quarterly getaways, I’ve got that huge notebook, and I’m just reviewing. Have I been too much in the New Testament for a while? Do I need this next series to be Old Testament? Does the next series need to be topical?

I only have usually one topical series a year, usually family but sometimes it’s contemporary issues. Even a topical series, Michael, is usually exposition. You’re just looking for a text that best addresses a cultural issue because I always want to have that teaching in there. I try to have a balance.

Bryant Wright:            Yeah, it’s a thematic exposition. It really is. I love biblical characters. In the last ten years of my life though, I’ve been amazed because this was not my early days, I stayed away from biblical prophecy.

I stayed away from biblical prophecy in the early days. I think it’s probably become my biggest passion, and I’m surprised by that.

Bryant Wright:            Because I did not preach a prophetic message for the first ten years I pastored at Johnson Ferry. But going to Israel, seeing what God is doing in the world, seeing what he’s doing in Israel, I became fascinated with all the texts that are related to that. My latest book, The Stage is Set, is trying to give for a layman just a practical, biblical explanation of the teachings of Christ’s second coming in the Old and New Testament together. It’s a real passion.

But I also feel because of the passion we have at Johnson Ferry Global Missions for global missions that there’s that eschatological dimension of global missions that is left out. That gives us the urgency to get the gospel out to every people group on the face of the earth. You combine the biblical prophecy. You see the Great Commission vision Christ has given us. Matthew 24:14 has probably become my theme verse for the last ten years of my life because Christ is clear when the gospel of the kingdom is preached throughout the whole world to every people group, then the end will come. Well, that’s a pretty strong guidance for us to be motivated that we’ve got a limited period of time to fulfill what he wants us to do.

Michael Duduit:          Good. One last question. What do you enjoy most about preaching?

Bryant Wright:            Michael, I honestly enjoy the study and preparation and the preaching itself. I just love both of those. Now, I will say this. When you pastor the same church 36 years, we were really overwhelmingly Baby Boomer families in the early days. Now we’re four generations that have happened, so it’s a different ballgame now in the multi-age congregation. That’s challenging though. I like that. It’s just I love the study.

As I tell folks, Monday through Wednesday, and Tuesday is usually a sabbath, but during that time a lot of administration, recovery from Sunday, getting all that done, but come Thursday, my heart begins to move again because I’m going in that study and it’s just like a rejuvenation begins to take place. I’m now on a sabbatical. Our church is good enough to give the ministers sabbatical, and I’m on a two-month sabbatical. Thankfully I preached Sunday for one of the guys in my mentoring group because to go ten weeks without preaching, I just begin to get a little antsy. Woe is me if I preach not the gospel as Paul says. I like to have one or two in there that I can still share the word.

Bryant Wright:              I know I’m giving you a long answer. I love to study. I love to preach. I will say this too. We’ve probably been in three services, in other words, three sermons on Sunday morning, about 27 or 28 of the 36 years, and that is exhausting. I don’t know why there is such a difference between two and three times on Sunday morning, but it’s a huge difference. It really is. I would love to be able to preach just twice. That would be nice, but I’m thankful we have that need.

Michael Duduit:          That’s right. Bryant, thanks so much for spending time today.