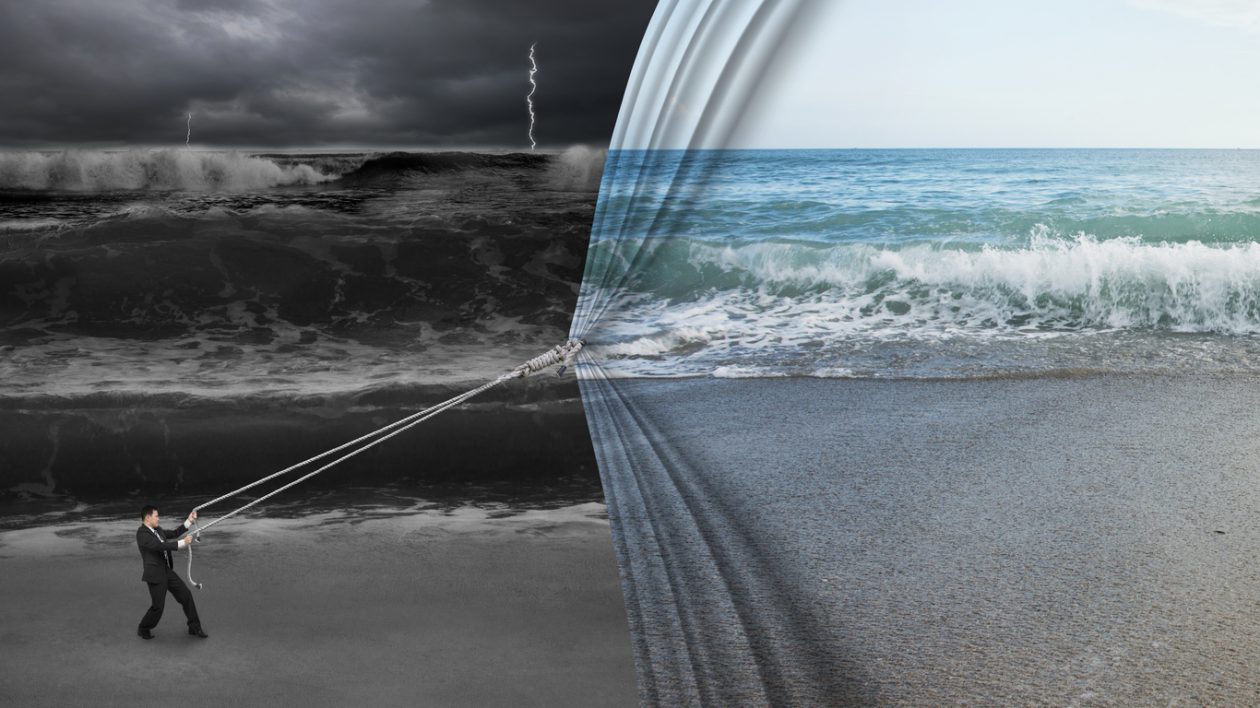 There has never has been a time when humans have not been fearful.  Distress, failure, disaster, death are never far away. Yet at certain times the darkness is greater and the whole world seems closer to hopelessness. While the twentieth century began with immense optimism that human progress was inevitable and upbeat utopian philosophies held sway, world wars, continuing conflicts, disasters, philosophies of disintegration and despair, terrorism, breaking down of moral norms and loss of truth have brought us into the twenty-first century which lurches in its post Christianity, post-truth, post-stability.

The most common response of my generation to the world situation is: “We feel so sorry that our grandchildren have to live in this world.” So much disturbs us.  However, I remember George McCleod (founder of the Iona community) once said that so many sermons he heard were 90% about troubles in the world and only 10% about the solutions.

And to us falls the immense task of preaching hope.  I say immense because compared with the other two big themes – Faith and Love – Hope is the most neglected. And preaching it is complex. Why? Because it involves major unlearning. We must make a distinction between natural hope and Christian hope.

Preaching hope means confronting what most people think hope is.

The most common form of hope is called ‘natural hope’ and people can easily mistake it for Christian hope. Natural hope comes out of human longing that things will turn out OK.  It comes from INSIDE us. It’s an essential part of human nature. Alexander Pope was right when he wrote: ‘Hope springs eternal in the human breast’, because we all know we need it to get through, to hope for the best even though we can never have assurance that matters will work out for the best.

We use the word hope every day. Sometimes it’s low grade – hope the weather will improve; sometimes desperate – hope my mother won’t die. Natural hope is essential. And it is largely positive thinking.  It depends hugely on feeling optimistic, looking on the bright side –  willing hope to work out OK.

Optimists can even take on the very worst situation. On TV they interviewed a friend of a young man killed in the Manchester bombing earlier in 2017. ‘He was the life and soul of the party. He loved life and celebrated it every day.  He left this world exactly how he lived – the center of attention. To celebrate him we are holding a party down here and he’ll be up there looking down and enjoying it.’ There were huge smiles all round.  Optimism at its maximum – really wanting it to work out well with brightness even in the toughest situation. Optimum human wish fulfilment.

Natural hope is everywhere. It’s even the way most people think of hope within the church. I think of Sally who said to me: You know I once went to church but when my sister died so young . . . I just gave up.  I mean, what’s the point of praying to God?  Or Mark, who in conversation over coffee said: You’ll be surprised that I was once a keen Christian but when everything went wrong – my health broke down, I lost my job and my marriage. It was a total mess.  Now, church and all that doesn’t mean anything to me.

Sally and Mark represent countless others because they assumed hope is about wishing everything will work out well. Understandably, since 95% of hope is natural hope, they brought this thinking into their worship. As long as they could feel positive about everything then belief in God was good.  But lose positive thinking and you drift into hopelessness.  Natural hope is limited and in church it is a false hope.

So many inside our churches are caught up in this false hope – a Christian optimism. That’s because we believe in God everything is going to be fine. Rom 8:28 “All things work together for good for those who love God” becomes a catch-all for times of fear, and always the hope of glory in heaven gives us cheer.  Let’s admit that Christian optimism grounded in Scripture is powerful. It can build church congregations, it can breed positive thinking.  Given the choice between optimism and pessimism there is no contest. Surely Christians are optimists!

But optimism is not Christian hope.  Christian hope is not about pumping up courage to keep going.  Long before Sally and Mark face problems they need to know that the resources for coping are not dependent on positive thinking, or them working it out.  It does not come from inside us but from beyond us.

The challenge for preaching hope is that so many inside our church are caught up in this false hope – Christian optimism. Everything is going to be fine.  Romans 8:28 becomes a catch-all for times of fear, and always the hope of glory in heaven gives ultimate cheer.  And optimism grounded in Scripture is powerful. It can build churches, it can breed positive thinking. Given the choice between optimism and pessimism there is no contest.

Preachers have, by God’s grace, to open up the wonder of Christian hope.

Christian hope could not be more different.  It’s rare. I suggest 5% because the human impulse of natural hope is so strong.  It’s specific, it’s dated to one moment in the history of the world.

Two disciples shuffle along the road to Emmaus and a stranger joins them.  He asks what they are discussing. With long faces they express surprise.  Are you the only visitor to Jerusalem who has not heard?

What things? the stranger prompts.

It’s about this Jesus and we had hoped that He was the one who was going to redeem Israel.  Oh, how we had hoped.  It all seemed to be working out right. We were all so positive about it.  This is natural hope at its optimistic best.  And you cannot blame these disciples investing hopes like this. At this point in human history, that’s all that human beings know how to hope with. Natural hope is the only possibility open to them.

There have been rumors some women have spread about an empty tomb and vision of angels who said that He was alive but all they found was an empty tomb.  We all know that dead men don’t come back to life.  Not in the world of natural hope. We say: While there’s life there’s hope’ but when there is no life, hope has gone.

Here natural hope finds its terminus. It can go no further. And in despair they cannot possibly believe that the very person with them on the road is the risen Lord Jesus.  That the world has changed, utterly changed. New hope, Christian hope, has broken into the world to hold men and women with undreamed strength and love.

For the first time someone has gone through the worst there can be – suffering, rejection, betrayal, physical pain, spiritual pain, death – enduring each as God’s son at levels that we shall never understand. And He goes there for the sake of a world that is rebellious and alienated from God to bring us back to God. At Easter He breaks through from the other side of death as no one else ever has done, can have done, to promise eternal life, to claim a kingdom that will outlast all things, for the whole world groans awaiting its full redemption in Christ (Rom 8:22).

The hope He offers does not depend on how we feel, on our levels of positive thinking; it depends on the Lord who comes beside us. It is Easter hope. As Peter puts it: “Blessed be God. By his great mercy he has given us new birth into a living hope through the resurrection of Jesus Christ from the dead into an inheritance that is imperishable, undefiled, unfading” (1 Pet. 1:3). The wonder of Christian hope.

Something happened to me when I was a Baptist minister in Blackburn, Lancashire.  I met Ken who was brought up by Christian parents in Houston. He said that he didn’t mind going to church when he was young and he enjoyed the children’s activities. But his parents forced him to attend worship until he was 17 and when he left for college his parents said: “We hope you find some nice Christian friends, Ken.

”To please his parents he did go to church as a student. The preachers used to get worked up when they were preaching but none of what they said seemed real. That was the word he used – it didn’t seem real to him nor to the other people in the church. Later, aged 23, working in New York City, a colleague returned from a few days out of the office. He said a most marvelous thing had happened to him and he wished it could happen to Ken.

And as Ken listened and went with his friend his own life was transformed too.  He had become . . . have you guessed? Ken said: “I became a Muslim.  Islam answers all my questions.”  After a short time his life had changed so much that he dedicated himself to becoming a Muslim missionary.

I was with two other Christian leaders in the Daisyfield Mosque in Blackburn meeting imams because of racial tension in the city.  Ken was present and before we left he said he had to speak to us.  Looking us straight in the face he told his story and said: “You will face judgement about your faith and you must make the right decisions.”

It was a shattering experience that this man had replaced Jesus because in all his experience Jesus was not real. He had found hope elsewhere.

Now I know that preaching cannot make Jesus Christ real but I can also preach as though Jesus is not real – not really alive to me now. I can preach Him in the past tense. Look back to the stories, give thanks for the cross, repeat the promise of heaven. I can take big Christian themes, teach lessons from Jesus about life, develop practical principles, and yet speak about Jesus as though He is not really alive now. To use rhetoric which boosts positive thinking in ourselves rather than trust beyond ourselves into Jesus.

When I arrived in the US it was the fashion for Christian young people to wear WWJD bracelets. Charles Sheldon published his sermons preached in Kansas 1896 as the book In His Steps.  In it he coined the expression ‘What would Jesus do?’  WWJD.  I expect the fashion may come back as fashions do.  But “What would Jesus do?” is past tense language. It requires imagining backwards about how Jesus in the gospels might act in any particular situation. It’s in grave danger of being an inside devotion depending on our positive thinking.

Instead the letters should be: WIJDWMRN – What is Jesus doing with me right now! He is alive and has given me new birth into living hope. I am living in His kingdom, in His story under His Lordship, sharing His mission, empowered by His Spirit.  He is real right now!

Christian hope pulls us into Christ’s future, it puts us into God’s story that promises a broken world reconciled, a world that is groaning awaits its full redemption in Christ whose Kingship will one day be evident before all creation.  He has changed the way we look at the future because He has changed the future for us. He knows the end of the story because He is the end of the story and he gives me new birth into His story.

Let us be preachers who confront false hope, open up to the wonder of Christian hope and practice it every day.  Preaching hope in an age of fear.

Michael Quicke is Emeritus Professor of Preaching at Northern Baptist Seminary in suburban Chicago, Illinois. He resides in Cambridge, England. This article was adapted from his keynote at the 2017 International Congress on Preaching.