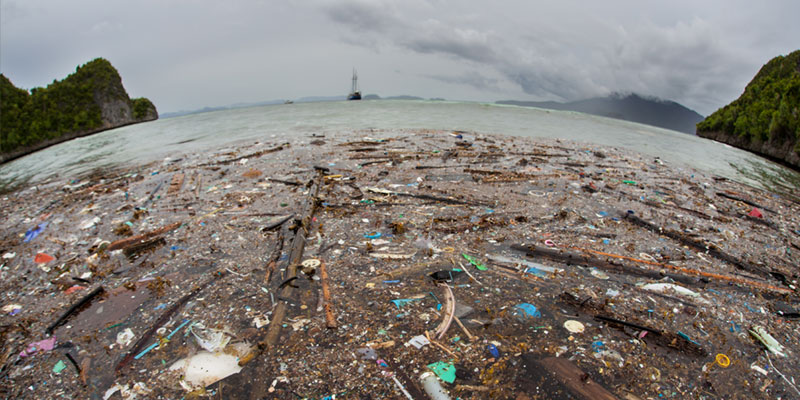 According to the Los Angeles Times, there is a huge floating garbage dump twice the size of Texas that is known as the Eastern Garbage Patch. Located halfway between San Francisco and Hawaii, the garbage patch is an area of slack winds and sluggish currents where flotsam collects from around the Pacific, much like foam piling up in the calm center of a hot tub.

Curtis Ebbesmeyer has been studying the clockwise swirl of plastic debris so long, he talks about it as if he were tracking a beast.

“It moves around like a big animal without a leash,” said Ebbesmeyer, an oceanographer in Seattle and leading expert on currents and marine debris. “When it gets close to an island, the garbage patch barfs, and you get a beach covered with this confetti of plastic.”

About four-fifths of marine trash comes from land, swept by wind or washed by rain off highways and city streets, down streams and rivers, and out to sea. The rest comes from ships. Much of it consists of synthetic floats and other gear that is jettisoned illegally to avoid the cost of proper disposal in port.

In addition, thousands of cargo containers fall overboard in stormy seas each year, spilling their contents. One ship heading from Los Angeles to Tacoma, Wash., disgorged 33,000 blue-and-white Nike basketball shoes in 2002. Other loads lost at sea include 34,000 hockey gloves and 29,000 yellow rubber ducks and other bathtub toys.

The debris can spin for decades in one of a dozen or more gigantic gyres around the globe, only to be spat out and carried by currents to distant lands. The U.N. Environment Program estimates that 46,000 pieces of plastic litter are floating on every square mile of the oceans. About 70% will eventually sink.