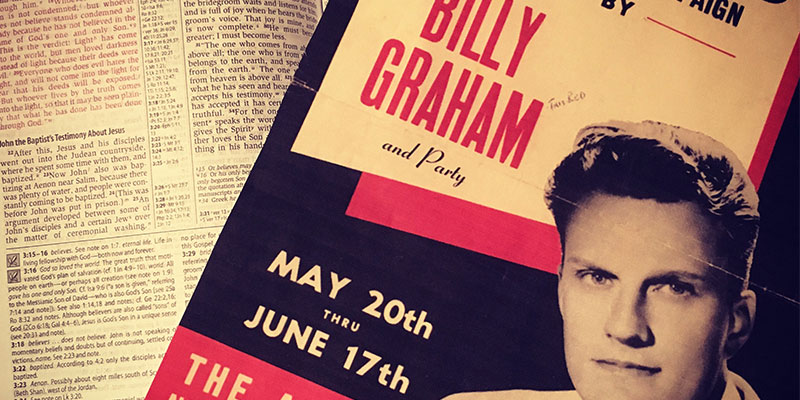 Billy and the President

In his autobiography, Just as I Am, Billy Graham tells about a conversation he had with John F. Kennedy shortly after his election:
“On the way back to the Kennedy house, the president-elect stopped the car and turned to me. ‘Do you believe in the Second Coming of Jesus Christ?’ he asked.
“‘I most certainly do.’
“‘Well, does my church believe it?’
“‘They have it in their creeds.’
“‘They don’t preach it’ he said. ‘They don’t tell us much about it. I’d like to know what you think.’
“I explained what the Bible said about Christ coming the first time, dying on the Cross, rising from the dead, and then promising that he would come back again. ‘Only then,’ I said, ‘are we going to have permanent world peace.’
“‘Very interesting,’ he said, looking away. ‘We’ll have to talk more about that someday.’ And he drove on.”
Several years later, the two met again, at the 1963 National Prayer Breakfast.
“I had the flu,” Graham remembers. “After I gave my short talk, and he gave his, we walked out of the hotel to his car together, as was always our custom. At the curb, he turned to me.
“‘Billy, could you ride back to the White House with me? I’d like to see you for a minute.’
“‘Mr. President, I’ve got a fever,’ I protested. ‘Not only am I weak, but I don’t want to give you this thing. Couldn’t we wait and talk some other time?’
“It was a cold, snowy day, and I was freezing as I stood there without my overcoat.
“‘Of course,’ he said graciously.”
But the two would never meet again. Later that year, Kennedy was shot dead. Graham comments, “His hesitation at the car door, and his request, haunt me still. What was on his mind? Should I have gone with him? It was an irrecoverable moment.”