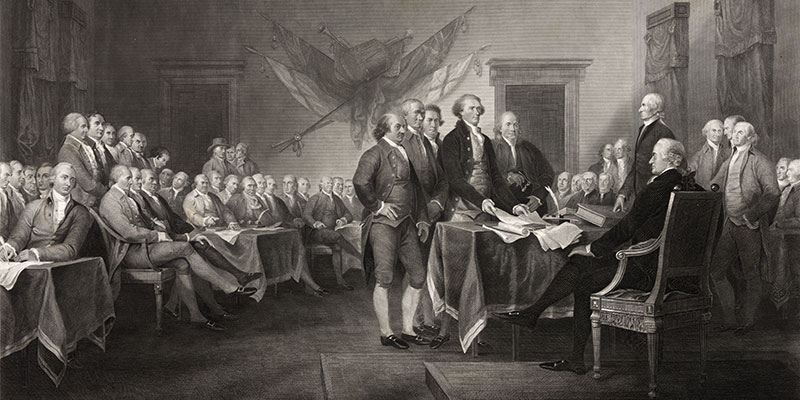 “On July 4, 1776, delegates to the Continental Congress in Philadelphia voted to adopt the Declaration of Independence. The men who issued that famous document realized they were signing their own death warrants since the British would consider them traitors. Many suffered hardship during the Revolutionary War.

William Floyd of New York saw the British use his home for a barracks. His family fled to Connecticut, where they lived as refugees. After the war Floyd found his fields stripped and house damaged.

Richard Stockton of New Jersey was dragged from his bed, thrown into prison, and treated like a common criminal. His home was looted and his fortune badly impaired. He was released in 1777, but his health was broken. He died a few years later.

At age 63, John Hart, another New Jersey signer, hid in the woods during December 1776 while Hessian soldiers hunted him across the countryside. He died before the war’s end. The New Jersey Gazette reported that he “continued to the day he was seized with his last illness to discharge the duties of a faithful and upright patriot in the service of his country.”

Thomas Nelson, a Virginian, commanded militia and served as governor during the Revolution. He reportedly instructed artillerymen to fire at his own house in Yorktown when he heard the British were using it as a headquarters. Nelson used his personal credit to raise money for the Patriot cause. His sacrifices left him in financial distress, and he was unable to repair his Yorktown home after the war.

Thomas Heyward, Arthur Middleton, and Edward Rutledge, three South Carolina signers, served in their state’s militia and were captured when the British seized Charleston. They spent a year in a St. Augustine prison and, when released, found their estates plundered. Such were the prices paid so we may celebrate freedom every Fourth of July.”

(from The American Patriot’s Almanac by William J. Bennett and John T.E. Cribb)