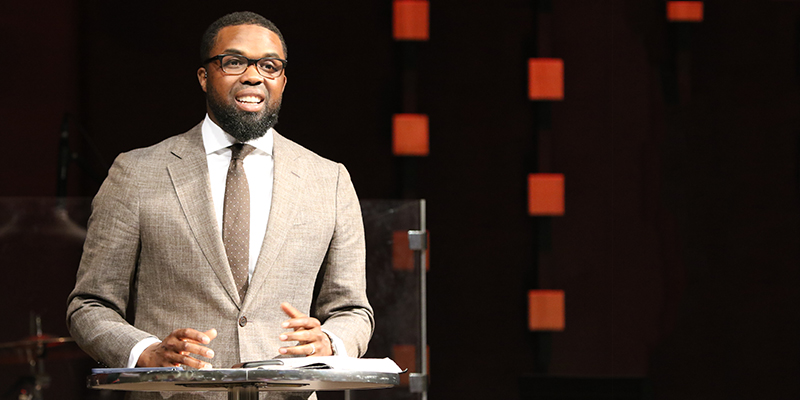 This interview was recorded live from the exhibit floor of the 2018 Southern Baptist Convention Annual Meeting on June 2018, in Dallas, Texas. Charlie Dates is Senior Pastor at Progressive Baptist Church in Chicago, IL.

Michael Duduit:         Hi, welcome to another Preaching Magazine video mini interview. I’m here with Dr. Charlie Dates, who is the senior pastor at Progressive Baptist Church in Chicago, Illinois. Charlie, thanks so much for visiting.

Michael Duduit:        Yeah, for those who don’t know, we’re meeting, having this interview in the exhibit hall of the Southern Baptist Convention in Dallas, Texas. It’s a bit of a circus.

Michael Duduit:          There you go. So, there’s some preaching going on too, while we’re here. Lemme talk to you a little bit about the whole issues of, we live in a visual age, we’re a media-saturated age. What impact does that have on preaching, and how can we utilize some of that cultural trend as a tool in our own preaching.

Charlie Dates:             Yeah, well I think to use your words, and in one sense we are a media over-saturated age. Persons in my generation and certainly those younger than me, I think, we’re raised with too much television. Television has a way of moving images really quickly, maybe even eroding the attention span. And so, for the person who enjoys technical exposition, they may find it somewhat difficult to preach to persons 35 and younger without engaging their ears as eyes, if you will. I’m trying this in my own preaching, to find a way to deliver the smooth lines of preaching. Whatever they may be, after we whittle them down, but in pictures. So to take advantage of the natural word pictures that emerge in the passage, or some of the imagery that may be latent in the passage, and drawing it to the fore, before I try to explain the passage.

So for instance, Peter says in 1 Peter 2:11, “To avoid the lusts of the flesh because they wage war against the soul.” There’s an image there of waging war. So preaching in our church, I’d be tempted to explain what beloved means in this passage, and what abstain is, but the image there right away, is that of waging war. A military campaign. I think it does my listeners, and me good for that matter, to see that come alive, and then draw the parallel from the text to everyday life that this is the same way your flesh will seek to destroy your new life in Christ.

So, I’m thinking that people are incredibly visual anyway. We see that in the preaching of Jesus. And so Jesus doesn’t just tell illustration, he preaches by the side of the road, where a man is laying on the side of the road, or a fig tree, or any number of instances where Jesus is pulling ideas from nature, or even standing on water. The backdrop of the Gospel, the Gospel accounts, are pictures. They’re ideas. It’s the countryside. And so, I think it would do us well to think about the people to whom we’re preaching. That they engage widely in that regard and weave that in our preaching.

Michael Duduit:        You are an excellent preacher, and one of the things that makes certain preaching effective is the use of illustration. Tell me a little bit about how you go about the task as you’re doing an exposition of a text. How do you right now go about finding those illustrations that will help the text come alive?

Charlie Dates:            Well you’re super kind, first of all. I hope my church thinks of my preaching what you just said. The first thing though, to be honest with you, I enjoy Preaching Magazine to this extent.

Charlie Dates:           Yeah that’s absolutely real. So in a recent online email, there was an article from the Washington Post of a guy who had the top 25 sayings that were going on tee shirts that summer. Those are areas that I would not normally think to read in, and so perusing periodicals like that, help to draw my attention to things that I would not normally catch. So, I have a Smartphone. Most people do. We’re in Chicago. I subscribe to the Chicago Tribune. And I just turn on the alerts, and undoubtedly in the course of a week, two of the 12 stories that come up on the alerts are going to be fodder for preaching material. So I just copy the link and put it in my little note section, and save it under a category that would help me.

So, that’s a second way. I try to keep to, Doc, a broader spectrum of reading other than Christian literature. Or Bible commentaries. So psychology is very helpful to me. History is even more helpful. And really, I don’t discriminate. I’ll just go to whatever my interest may be and try to read broadly, and those things just jump up. Now there are some things I have to intentionally work into my reading schedule. Old classics. And part of the reasons I try to reach for old classics is because, let’s say seven out of 10 people are gonna be familiar with a name that comes up from an old classic.

I can’t think of the author’s name right now [referencing Leo Tolstoy – How Much Land Does a Man Need?]. Ah, it’s very popular name, but he writes of a young man named Pahom, who basically ran … the owners of the land, he was trying to get some land … he ran as wide as could around it. They gave him 30 minutes to run as wide as he could, and whatever he could run around, and make it back to the starting point, he got to keep as his own. Well, he was so greedy, that rather than running half the distance, Pahom extended his time so that when he got back to the starting point, he collapsed and died. And the author makes the point that six feet is all he could take. Because when you live by greed, that’s all you can consume.

Charlie Dates:              So all of those things just kinda come from a discipline of reading a wide variety of things, and reaching for classics, and then they show up. I tend to think too, one last piece, is that life is a book of illustrations if you just look around. Any and every thing happening around. You people watch and you can see the truth of scripture come alive in living color.

Charlie Dates:              Oh, when it works. And who knows really if I know when it’s working or not. I’m scheduled to preach tonight, and I’m really wrestling with this First Peter passage, and I am praying. At this season of my life in ministry, I’m enjoying saying to God that nothing I’m gonna do in this pulpit is gonna happen without Your power. And so in one sense, I gotta do the work, but if I flunk it ain’t on me. Lord, I need You to come through. So learning to depend on the power of the Holy Spirit is something I’m really learning to enjoy, and to take comfort in. That He is the communicator of truth, and I partner with Him. He uses me to do that work.

Probably another thing, is at our church, I’m learning to relax a bit more in preaching. Not to preach as long. So I typically come, and I try to be rather technical and work my way through, but I’m learning that in following the Holy Spirit, the saturation level gets pretty high for people really quickly. But I can relax and get the main point across and follow the gentle wind of His spirit with what I’ve prepared, and if some of it doesn’t make it into the sermon, it’s okay. I would play Monday morning quarterback. I still do. I play Monday morning Quarterback and be so hard on myself, ’cause there were things there that should’ve went in. And you know, that’s not really my decision to make. So I’m enjoying that these days.

Michael Duduit:         Good. Charlie thanks for visiting with us.