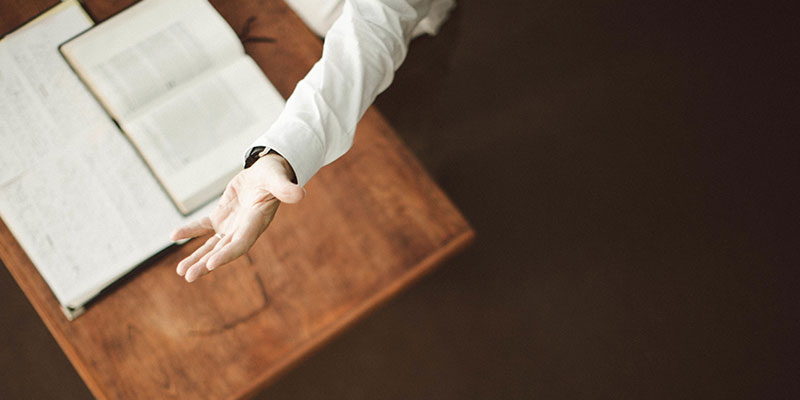 It’s 9 p.m. on a Saturday night and you are in a preaching panic. Your sermon for tomorrow is only half ready and you’re in desperate need of a few good illustrations, a couple of more points and, oh yes, one captivating intro. True, you had good intentions to prepare during the week, but with the five counseling sessions you did (two which were not scheduled), the six church members you visited and prayed with in the hospital, the Wednesday night prayer service you had to prepare for, the two funerals you attended and the weekend men’s retreat you were asked to do morning devotions for, there hasn’t been a lot of quality time left for Sunday sermon preparation.

You quickly jump online to a “sermons ‘r us” website, find your topic, grab a couple of illustrations, a scripture passage you hadn’t thought about, and one “captivating intro.” You only feel half-guilty as you put it all together – so it’s a “Saturday night special,” but it’s all for the glory of God anyway, right? Or wrong?

Integrity – Giving Credit Where Credit Is Due

While most experts would agree that pastors have borrowed and copied sermons, illustrations, and original ideas for centuries, the debate that has recently heated up over sermon plagiarism can in part  be credited with the mass media communication available today, particularly on the web. This year alone, several stories hit the newsstands related to pastors and clergy in various denominations who found themselves under investigation for delivering sermons that were not their own – and leaving that one important fact out when they preached it to their congregations who later found them out.

“To preach someone else’s manuscript is to abandon the stewardship responsibility to meet with God in bringing a word for a specific group of people,” says Hal Poe, the Charles Colson Professor of Faith and Culture at Union University in Jackson, Tenn., and interim pastor at Second Baptist Church in East Memphis. “To take someone else’s sermon and then bring it to another group of people, though the topic may apply, there is still an element of misrepresentation and deceit going on in which the preacher is deceiving the congregation.”

Obviously, as a pastor who plans sermons on a weekly basis, you must get your resources and supporting points and illustrations from somewhere – no one can create every sermon from scratch. So what is acceptable and what isn’t? What should you publicly reference and what should go unmentioned?

R. Leslie Holmes, pastor of First Presbyterian Church in Pittsburgh, Pa., believes the issue isn’t as complicated as some might make it.

“If you know in your heart – and it is a heart issue – that the material you’re using in your sermons originated with someone else, you ought to give them credit for it,” says Holmes, who goes by his own rule of thumb for giving credit if the quote or fact is longer than a sentence.

“I think every congregation has the right to expect their pastor to be familiar with their needs and with the Word of God in order to bring an answer to them,” says Al Fasol, Distinguished Professor of Preaching at Southwestern Baptist Theological Seminary. “To use someone else’s sermon that may not fit that exact context may say something about that pastor’s own relationship with God.”

Fasol, Holmes and others all agree that pastors can be inspired by another’s sermon, whether it’s an idea, an insight or use of scripture and utilize it as a jumping-off point for developing in their own context. They agree that it’s ok to “borrow” something from another’s sermon provided it’s credited. But the question of what can be borrowed and how much is credited remains up for discussion.

“It’s hard to footnote a sermon,” Haddon Robinson, the Harold John Ockenga Distinguished Professor of Preaching at Gordon-Conwell Theological Seminary , points out. “I don’t think you have to footnote anything from a commentary or a resource of that nature, but when you get the substance of what you’re talking about from another’s sermon, you’re obligated to say ‘what I want to talk about this morning, I’ve gotten a great deal of help from…’ and attribute the source.”

Robinson believes that one of the mistakes pastors make too often is taking an illustration they’ve heard from someone else and implying that it has happened to them.

“It’s wrong, and it’s stupid,” says Robinson, matter-of-factly. “You cannot take stuff that doesn’t apply to you and say that it has.”

Pastoral Pressures – A Concern or an Excuse?

When it comes to why a pastor would be tempted to steal complete sermons or portions without giving credit, two different camps of thought exist – lack of time and lack of preparation.

“The expectation of the congregational leader has gone up dramatically in the last 30 years,” says Kevin Miller, executive editor of PreachingTodaySermons.com, which has several hundred pastors subscribe to their website a month for fresh sermons from other top-quality pastors.. “Pastors are now expected to be strong leaders, vision casters, legally knowledgeable, all while providing Disney-quality childcare. You can’t do all of that and provide an outstanding sermon as well.” He adds that the Internet with its easy and quick availability also makes it tempting for pastors who are struggling with the pressures of not enough time.

Other experts, like Poe – himself a former pastor — disagree with the concept that pastors don’t have time for adequate preparation.

“Pastors have always been busy, so it’s not simply that there’s more to do now than there was,” says Poe. “Pastors may be poor organizers of their time, perhaps paying attention to the wrong priorities, or trying to meet expectations they know are impossible.”

“I think pastors who don’t give credit where necessary are not only insecure with who they are and what they believe, but there’s a bigger reason of just being lazy,” says Holmes. “You just don’t want to put in the time. The old saying, I believe, is very true – it takes one hour of study for every minute of preaching.”

If the time factor is preventing a pastor from adequately preparing, Fasol suggests discussing the problem with members of the congregation.

“If the load is too heavy, preacher and the church need to get together and share the load,” says Fasol, stressing the importance of educating the congregation on what’s involved in preparing for each Sunday. “I think the preacher would do well to share from time to time what his typical day is like and the hours he studies best and when he shouldn’t be interrupted except for emergencies.”

Preparation – the most important part of the sermon

All agree that adequate time for preparing your sermon is important, but there are different theories on how to go about it. Sermon web sites, both free and subscription, number in the thousands, offering pastors a wide range in available ideas.

“We encourage our pastors to use our sermons as a starting point in sermon preparation,” says Steve May, editor of SermonNotes.com, a site that serves 2,000 subscribers. “The idea that a preacher who doesn’t listen to other sermons is like a novelist who doesn’t read books or a journalist who doesn’t read the newspaper. You have to get input from other places.”

Knowing where those sermons and starting points come from is something to be cautious about, warns Robinson. His daughter, who frequently travels in her job, recently told him about an experience she had when she struck up a conversation with a man on a recent flight who wrote sermons for pastors for an annual $500 subscription cost.

Holmes, in his preparation, makes it a point to read the sermons of others.

“I read a sermon by another preacher every single day,” says Holmes, who admits he frequently gets sermons off the internet for spiritual edification and instruction. “It feeds my soul, challenges my heart, and challenges my thinking. Would I preach what they say? I would hope only if I were giving them proper credit.”

Poe believes that most sermons are written outside of the study.

“Most sermons are a week-long process of paying attention and noticing things,” says Poe. “We’re bombarded by ideas for sermons all week long and to think of sermon preparation as the time just in the study laboring with books for hours on end is one type of sterile preaching. The more dynamic preaching comes when you practice the discipline of noticing the spiritual significance of events about us. You find the same power of preaching in Jesus.”

Regardless of how much you cite your sources and credit your inspirations, the hope of all those interviewed is that pastors are growing both spiritually and as the spiritual leaders of their congregations as they read and study God’s Word.

“If you think about it, there is actually precedence in church history for the sharing of information, particularly in the early days of the Reformation when it was important to distribute doctrine accurately,” says Miller.

“An analogy that I’ve heard used before that could be applied is that when someone brings a cake, it’s not so much whether they made it from scratch, bought it from the bakery or had help with a box mix – it just depends on who’s bringing the cake. And in the pastor’s case, it’s who’s bringing the sermon, and the heart behind it.”

Do a preaching calendar.

Haddon Robinson says that by preparing a calendar, you can be better prepared in advance, which will help your own course of study.

Use a number of sources.

“There’s something to be said for the old saying ‘If you steal from one person, it’s plagiarizing, if you steal from eight people it’s scholarship,” says Robinson, chuckling.

Strive to use original illustrations.

“If you’re relying on someone with a national reputation for illustrations, chances are, they will have already been heard,” says Poe. He suggests watching the news, reading the newspaper, and keeping up with the current tv, movies and music that people are watching for new ideas.

Keep a notebook of ideas and write them down.

“We have brilliant insights all day long and then we forget them,” says Poe. By writing ideas down and keeping them in one location such as a notebook, pastors are helping themselves build up important reference libraries

(from the January-February 2003 issue of Preaching)