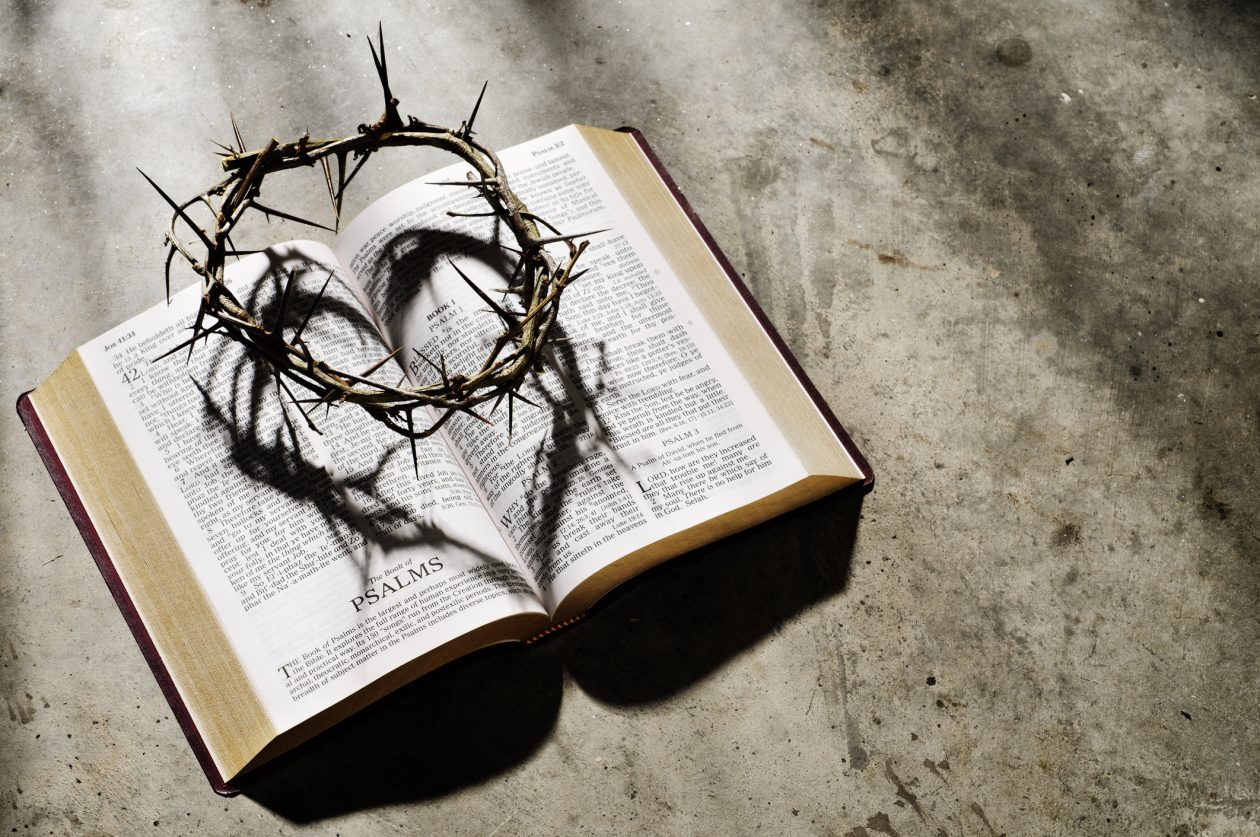 “Where is Jesus?” My mother did not intend the question to rebuke me, but it did. I was in seminary, I had recently purchased a multi-volume theological dictionary, and I was showing it (off) to my mom, who is a devoted Christian. As I pointed out some of the sentences in Hebrew, Greek, and German, her expressions seemed to shift between perplexed and vacant.

I read a few lines here and there, and when I saw the word “Jesus” in Greek I said, “And there’s Jesus.” Instantly my mother’s interest roused and her eyes transfixed on the page. “Where is Jesus?” she asked eagerly.

I felt a surge of embarrassment that I attempted to conceal. I realized that my mother was excited about Jesus, not the academic study of texts, and at that moment my excitement was in the other direction. I felt a stinging rebuke, not from my mom, but from my own conscience and from God. In that moment (and in countless moments since) I have had to ask myself my mom’s question. “In the study I am doing, where is Jesus?”

How do we go about connecting Old Testament texts to Jesus when we preach? Is there a practical method to follow in weekly exposition? Consider how asking certain questions will open the door to Jesus and the gospel.

First we should ask,

Is the passage repeated or reflected in the New Testament?

This is likely the most obvious path to teach about Jesus from the Old Testament, since the door has already been opened by the New Testament. Sometimes the reference to the Old Testament is only a passing allusion. Matthew, for example, refers to the fact that Joseph raised Jesus in Nazareth “that what was spoken by the prophets might be fulfilled” (2:23).

We are familiar with the prophetic announcement that the Messiah would be born in Bethlehem (Micah 5:2; Matt. 2:4–5), but where is a statement that the Messiah would be from Nazareth? Most likely, Matthew was referring to Isaiah 11:1, where the prophet referred to the coming Messiah as a “branch.” The Hebrew word for branch is nezer, a word that can be seen in the name Nazareth. Nazareth was “branch town,” a pun that Matthew did not miss. In an exposition of Isaiah 11, we will not want to miss it either, especially since it has been pointed out for us by the Gospel writer.

A second question is,

Does the passage address a theological theme that is also addressed in the New Testament?

The New Testament also helps us interpret Old Testament passages related to Adam, Abraham, etc., since the New Testament explication of the gospel includes references to such persons: Jesus is the new Adam, and our salvation is through faith as was Abraham’s. We will not miss such references as long as we remember to ask the question, does this passage address a theological theme that is also addressed in the New Testament?

Does the passage reveal something about the human problem?

The human problem is sin and the alienation from God caused by sin, and we can see some reminder of human sinfulness in every passage in the Bible. In our preaching we show how the biblical text before us highlights a human need that results from our fallen condition, and then we show how God meets that need. Such an approach will lead naturally to speak of Jesus, since God meets our need in him.

A fourth question we should ask is,

Where is the passage located in salvation history?

Part of our exposition of every Old Testament passage will be an exploration of historical context, so we will identify the location of the passage on a time line. That time line is not just history; it is salvation history—the history of God’s gracious acts to redeem humanity. Salvation history leads to the coming of Jesus the Savior, and one day he will consummate history as we know it and inaugurate a new order. No matter where our passage is located on the time line of salvation history, we can point out that God’s plan progressed from that point and reached its denouement in Jesus. Then we explain the gospel as the fulfillment God intended all along.

We can also ask a fifth question:

Does the passage raise a question that is answered by Jesus or the New Testament?

In Psalm 73 the psalmist raised the age-old question of “the prosperity of the wicked” (v. 3). It’s a difficult question about God’s justice that can rock us to our spiritual core. However, before Psalm 73 is finished, the psalmist wrote about how he arrived at an answer for his questions. In worship he viewed the inequities of life from the perspective of eternity. From that vantage point he could see the end: judgment for the wicked and reward for the righteous.

Not all passages in the Old Testament raise theological questions and then answer them. Theological tensions raised by the text are not resolved. Such passages are more common in books like Job and Ecclesiastes. Yet those books are part of a canon of Scripture that does contain answers for their questions, and all our questions find their answers ultimately in Jesus.

In the matrix of Solomon’s backsliding from God and philosophical quest, he wrote some rather unorthodox ideas.[2] In a series of sermons from Ecclesiastes, I took the title for one sermon from one of Tennyson’s poems: “An Infant Crying for the Light.” Solomon was crying for the light, and what he cried for, Jesus gives. Like Solomon, Jesus observed injustice, but He was no passive observer. When He saw the crooked money-changers in the temple, He threw them out. Jesus also grieved over oppression as Solomon did (e.g. Matt. 9:36).

But Jesus did more than grieve; He healed the sick, cast out demons, defended the helpless, died to atone for sin, rose from the dead, and gives abundant and eternal life to all who put their faith in him. Like Solomon, we don’t understand a lot of things. We’re infants crying for the light. But because of Jesus we’re going to live forever with the One who does understand. Whenever we encounter questions raised by an Old Testament text, we point people to Jesus who provides answers now and forever.

Sixth, we can ask,

Does the passage reveal an attribute or activity of God?

When we encounter in the Old Testament a description of God’s character or work, we’re encountering a description of Jesus. Jesus said, “I and the Father are one” (John 10:30), and “Whoever has seen me has seen the Father” (John 14:9). Jesus said that he is the one, true, eternal God. The Jewish leaders of Jesus’ lifetime understood what Jesus was claiming, and that’s the reason they wanted to kill him (John 5:18). The early Christians also understood him, and they believed him. Colossians 1:15 says of Jesus, “He is the image of the invisible God,” and verse 19 adds, “In him all the fullness of God was pleased to dwell.”

One hermeneutical entailment of adopting an orthodox view of the Trinity is a willingness to attribute the words and works of God the Father to God the Son. Paul adopted such a hermeneutic. Fully aware that Genesis 1:1 affirms, “In the beginning, God created the heavens and the earth,” Paul wrote of Jesus, “By him all things were created” (Col. 1:16; cf. John 1:3). The prophets repeatedly asserted that they were preaching God’s message, and Peter affirmed that they prophesied by “the Spirit of Christ in them” (1 Peter 1:11). Writing such statements created no conflict for Paul or Peter, since they believed that Jesus is the same Person as the God of the Old Testament.

The oneness of God the Father and Jesus was Paul’s theological assumption when he exhorted the Christians in Corinth to be different from the Israelites who tested God in the wilderness. Instead of writing “God,” Paul wrote “Christ” in the sentence, “We must not put Christ to the test, as some of them did” (1 Cor. 10:9). When the Israelites tested God, they were testing Christ. Paul was reading the presence of Jesus back into the Old Testament. We may do the same and thus connect the Old Testament to Jesus.

A seventh question we can ask to connect an Old Testament text to Jesus is:

Does the passage refer to something or someone that is a type of Jesus?

Such typology begins by identifying an activity of God that is typical of the way he works. The theological foundation for typological connections is God’s immutability. Since God’s nature does not change, we may expect him to deal with people according to consistent principles. In Old Testament history God established that he acts in particular ways, and we can expect Him to act in those ways today. The expositor using typology shows how the typical activity of God is also true of Jesus. The Old Testament action or item is the “type,” and Jesus is the “antitype.”

A text’s context and the author’s intent are the starting points for any typological considerations. In other words, typological method should not read into an Old Testament text a different or higher meaning, but draw from the text a Christological application of the same meaning. To justify a typological connection between an Old Testament passage and Jesus, preachers should be able to point to factors such as linguistic correspondence between the type and antitype, and they should note how both are related similarly to God’s plan of redemption. Plus, as we move from type to antitype we look for escalation. That is, the antitype is greater than the type. This criterion will be fulfilled if we follow the rule to limit typology to those types that find their antitype in Jesus.

How, then, is the tabernacle a type of Jesus? In Jesus, God came to meet with us. The Gospel of Matthew states that the birth of Jesus was a fulfillment of Isaiah 7:14, which calls the coming Messiah “Immanuel,” meaning “God with us” (Matt. 1:23). John 1:14 says, “The Word became flesh and dwelt among us.” The Greek word translated “dwelt” is the verb form of the noun used in the Septuagint to refer to the tabernacle. Translating John 1:14 literally, we could say that Jesus “tabernacled” among us.

Also, the New Testament refers to Christians as the temple of the Holy Spirit, meaning that God lives with/in people who know Jesus (1 Cor. 3:16–17; 6:19; 2 Cor. 6:16). Thus the tabernacle “represents” Jesus in that this work of God is typical of the way God works throughout history and particularly in Jesus.

Typology is not the same as allegory. If we applied allegory, or some sort of allegorical abuse of typology, to our study of the tabernacle, we would claim that the tripartite structure of the tabernacle represents the Trinity, the ephod the priest wore represents “putting on Christ,” and so on as far as our imagination could take us. Though typology has sometimes degenerated into allegory, it is still a valid method when controlled by focusing on the immediate context and limiting the application of the method to the typical ways God has acted in salvation history as demonstrated in the Bible.

As we preach the Old Testament, may we also bear witness to Him. After people hear us preach, one question we hope they never have to ask is, “Where was Jesus?”

Allan Moseley became Professor of Old Testament and Hebrew at Southeastern Baptist Theological Seminary following 25 years serving as a pastor. This article is an excerpt from his most recent book, From the Study to the Pulpit: An 8-Step Method for Preaching and Teaching the Old Testament.

[2] I am taking the position that Solomon wrote Ecclesiastes, which is by no means a unanimous position.